Seville, 5 December 2018. The delegate of Urban Habitat, Culture and Tourism of the City of Seville, Antonio Muñoz, has this Wednesday inaugurated ‘Aplicación Murillo. Materialismo, Charitas y populismo’, in Espacio Santa Clara, the last exhibition of the master’s fourth centenary, a celebration that has just reached in the current year two million spectators. The event was also attended by the Director of Culture of the City Council, Isabel Ojeda, the territorial delegate for Culture of the Junta de Andalucía, José Manuel Girela, the Deputy Director General of the Museo Reina Sofía, Cristina Juarranz, the Deputy General of Álava and President of the Board of Trustees of Artium, Ramiro González, the Director of the Focus Foundation, Anabel Morillo León, and the Director of CICUS, Luis Méndez.

More than 600 pieces are part of the largest exhibition of contemporary art held in the city. Curated by Pedro G. Romero, Luis Martínez Montiel and Joaquín Vázquez, ‘Aplicación Murillo, Materialismo, charitas y populismo’ shows the power with which Murillo’s work can operate in the 21st century. According to Muñoz, the project works “as an optical correction thanks to which the public will rediscover the genius of the Baroque with a new look, through the validity of its production and its themes in contemporary art”.

Although he is aware of the academic advances that interpret the artist’s painting in his time, ‘Aplicación Murillo’ also takes into account his myths, the topics that circumscribed him historically, the ups and downs of his life and the patrimonial vicissitudes of his work that contributed so well to his drawing. The exhibition discourse focuses on his working methods, on the keys that can continue to be useful so that the way we understand Murillo’s way of making art is a function that can apply to our present.

After the presentation by Antonio Muñoz, who stressed that it is not every day that an exhibition of more than 600 pieces is presented, the curator Pedro G. Romero intervened, thanking the collaborating institutions and all those who have made the Year of Murillo possible and a large-scale project such as this exhibition. “This exhibition is a great toolbox for understanding Murillo in a different way”, he pointed out, then explaining that the exhibition’s discourse is inserted between the modernity that rejected Murillo and the popular culture that made use of his work. “The exhibition interprets Murillo’s work poetically and with great risk and tries to remove the dandruff and the kilos of academia that often overshadow him. What we are trying to do is to attack the prejudices”, he concluded.

Next, the deputy director general of the Museo Reina Sofía, Cristina Juarranz, spoke, listing some of the artists whose works are shown in the exhibition and thanking them for participating. “For the museum it is an honor and a great opportunity to be present at this important event that is being held in the city of Seville.

The next to speak was Ramiro González Vicente. The Deputy General of Álava and President of the ARTIUM Board of Trustees stressed the importance of museums collaborating with each other so that everyone has the opportunity to get to know the works in other centres and cities.

González Vicente gave the floor to the director of the Centre for Cultural Initiatives of the University of Seville, Luis Méndez, who reiterated CICUS’ commitment to culture and contemporary art through its exhibitions. “This exhibition will mark a before and after in our centre because thanks to it we have made a leap in quality”.

Next to speak was the territorial delegate for Culture of the Junta de Andalucía, José Manuel Girela, who stressed the collective effort that has made it possible to set this initiative in motion. “It is essential that this effort is not only useful for the inhabitants of Seville, but for everyone who comes from outside. It is an achievement to have put Seville on the map thanks to an artist like Murillo”.

Antonio Muñoz closed the event showing his satisfaction. “There is no better way to demonstrate the slogan of Murillo’s innovative gaze than to see five venues with works that place the painter in his place, beyond his religious painting and his Immaculate Conception. With ‘Aplicación Murillo’ we are going to discover the influence of the artist on many authors. Establishing a dialogue between his painting and contemporary art is very interesting. Finally, Muñoz reiterated his gratitude to all those who have contributed to making this exhibition possible and recalled the more than two million visitors who have passed through the various activities of the Year of Murillo.

An exhibition that brings the present back to Murillo

The exhibition is distributed in five different spaces, in a route that begins in the four rooms of Santa Clara, continues in the three rooms of Atín Aya, passes through two rooms of the Hospital de los Venerables, headquarters of the Focus Foundation, continues in two large spaces of Cicus and ends in the Hospital de la Caridad, where this Monday, from 17:00, will be held the action entitled ‘Los mil y un cartón’, by artist Julio Jara.

Materials from various fields of research make up the project. The memorabilia, the ephemeral, the popular industrial production that from a very early stage integrated Murillo’s iconography among its products; also the iconographic production around Murillo’s biography, the illustration of his myths and avatars and the novel invention of his “artist’s life” score the story; finally, the production of modern and contemporary artists, directly linked to Murillo, referring to them or quoting them or simply concurring with him in his intentions, ends up completing the exhibition rooms.

As ‘Aplicación Murillo’ demonstrates, many of the visual practices of the art of our time have, whether they know it or not, a direct relationship with the master’s ways of doing things: objective realism, social photography, rococo minimalism, vaporous abstraction, feminized painting, epiphany cinematographies, textile and artisan arts, conceptual mysticism or care performances are all fields, forms and extensions genealogically related to Murillo in one way or another. In the encyclopedic vocation of the project, the circulation of Murillo’s ways of doing has been reduced to three areas: Materialism (Espacio Santa Clara), Charitas (Sala Atín Aya and Hospital de Los Venerables, headquarters of the Focus Foundation) and Populism (CICUS). 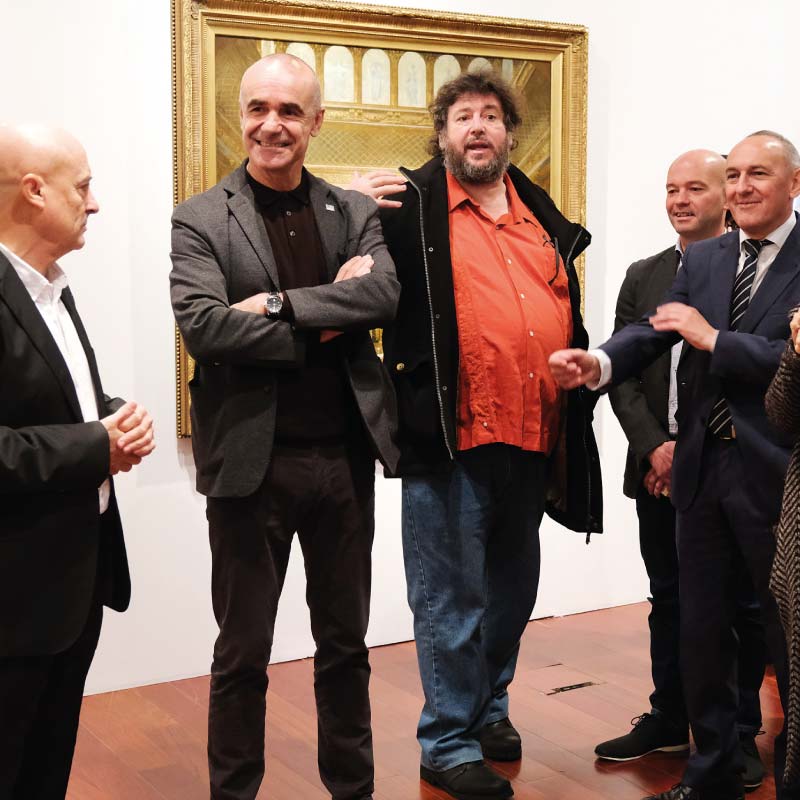